Sometimes seeing reverse status on Facebook or Twitter and others. Actually Making Status Reverse on social media such as Facebook Twitter and others is a trick and tips for old school alias. But sometimes it’s unique and there may be benefits for marketing in Social Media, as there have also been people putting advertisements in print media in an upside down position. But there’s nothing wrong with knowing just for your knowledge and insight, so don’t be too clueless! It is learning Facebook Marketing …

There is no work, and makes me dizzy I have to head or mobile to be able to read it, there are also those who can read without turning their heads, reading with the power of reason like reading ordinary text. Wow this is great.

In social media, don’t be too serious, especially until you fight because of the different choices of the presidential election, for example. Make motivational words that are light and useful and entertaining. But don’t assume this is just a fad, there could be another purpose behind it. And it is legitimate as long as you do not provoke or claim hatred and so on.
Less and more of the writing above is like this:

1. First Open http://www.fliptext.org
Then the display will appear as shown below: 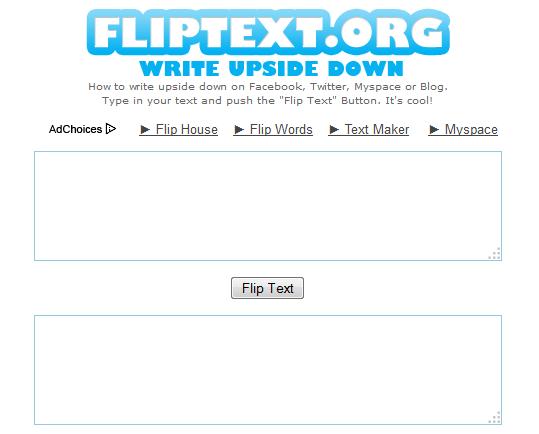 2. Please you write the text that you want to make upside down in the top column.
Then, click Flip Text.

Then later the writing will come out in reverse in the column below.

3. Then you copy the upside down writing and paste it in the Facebook and Twitter status timeline.

Hopefully the tricks and tips How to Make Reverse Status on Facebook Twitter is useful and insightful. For those of you who haven’t tried it, please try it he he.

Thank you … I have been willing to stop by our blog.